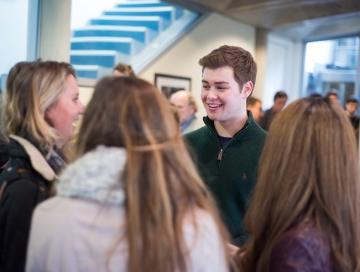 The Rothermere American Institute is a department of the University of Oxford. It was created in 2001 with a mission to promote ‘greater public and academic understanding of the history, culture and politics of the United States’ - within Oxford and beyond.

Housed in an award-winning modern building, the RAI is the foremost academic institution beyond America’s shores for teaching and research in US history, politics, international relations, literature, and culture.

Every year, it hosts more than 200 seminars, workshops, conferences and lectures. These attract students, scholars, policy-makers and public figures from across the world to study the United States.

‘Where has America come from and where does it find itself? What is it doing, and what ought it to do in the world?’ President Clinton posed these questions at the Institute’s opening. Today, they remain at the heart of the RAI’s mission.

Viewing the United States from an external angle gives the RAI a unique perspective. The Institute sets US experience, practice and policy in comparative contexts with other nations in the Atlantic area and beyond. It draws on the resources of Oxford University’s other departments and on research institutes, politicians, civil servants, independent experts, authors and journalists, in Great Britain and abroad.

As part of the RAI's mission of promoting greater public understanding of the United States, many events are open to the public. We also welcome school students to study in the Vere Harmsworth Library or participate in special events.

“The RAI has emerged as a premier site for encounter, debate and research around the understanding of the USA. The Institute and its programmes offer a powerful environment for American and European scholars to pursue a refined understanding of the commonality and differences that both unite and separate the two regions."