History of the RAI 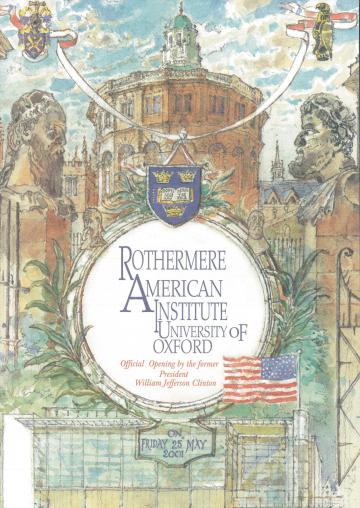 When he was President of Princeton, Woodrow Wilson remarked that if Oxford ever offered him a position, he would return to Princeton only long enough to pack his bags. Although Wilson never carried out this threat, he took the Oxford tutorial system back to Princeton when he invented the ‘preceptorial’ system of individual tuition by assistant professors.

Soon afterwards, the generosity of Cecil Rhodes ensured that a stream of bright American graduates – the optimistically described ‘scholar athletes’ of legend – came to Oxford, bringing with them energy and optimism.

The Rothermere American Institute sprang from discussions between historians and political scientists in Oxford and the United States. Among the many figures who contributed to the conception and establishment of the RAI were two Oxford Vice-Chancellors, Sir Richard Southwood and Sir Colin Lucas; Sir John Elliott, FBA, Regius Professor of History; Philip Williams, FBA, a distinguished scholar of American and comparative politics; David Hackett Fischer, a celebrated American historian and Harmsworth Visiting Professor of American History; and John Rowett, Fellow of Brasenose College.

The establishment of the RAI reflects the generosity of the Harmsworth family and the Rhodes Trust. The Harmsworth name has long been associated in Oxford with the Harmsworth Visiting Professorship of American History, which has brought more than sixty distinguished historians to Oxford, including Joyce Appleby, Alan Brinkley, Liz Cohen, Linda Kerber, Peter Onuf, Robin Kelley, Richard Blackett, and Annette Gordon-Reed.

The Harmsworth family contributed mightily to the RAI’s founding, not least through the commitment of the late Vere Harmsworth, 3rd Viscount Rothermere; the late Esme, Dowager Countess of Cromer, who served as the energetic Chair of the RAI Founding Council; and Vyvyan Harmsworth, LVO, Secretary of the Rothermere Foundation.

Scholars of American politics and government have been enabled to work at the RAI through the generosity of Rivington and Joan Winant in establishing the John G. Winant Visiting Professorship of American Government, in commemoration of the distinguished US Ambassador to Britain during the Second World War. Recent Winant Professors have included Lisa L. Miller, Sidney M. Milkis, David Sehat, and Stephen Skowronek. The generosity of anonymous donors enables the Institute to bring distinguished visiting fellows from the United States and other parts of the world to Oxford, and to provide postdoctoral fellowships and graduate scholarships. 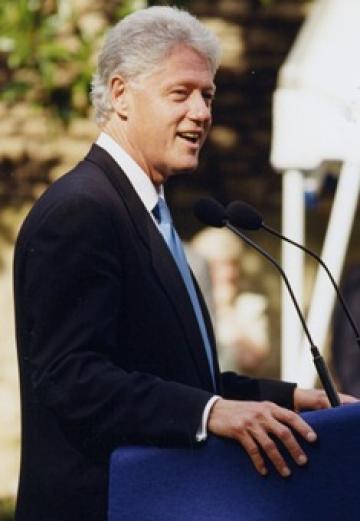 William Jefferson Clinton, former President of the United States, officially opened the Rothermere American Institute in front of 400 guests on Friday 25th May 2001.

Welcoming the former President back to Oxford, the Chancellor, Lord Jenkins of Hillhead, told Mr Clinton: “This is an important day for Oxford, not only because of your visit, but because the opening of the Institute makes an important addition to our facilities for American Studies.”

The Chancellor's speech was followed by comments from Lord Rothermere, who spoke of the dream of his father, the third Viscount Rothermere, to create an institute for American Studies, and said: “My father died shortly after these foundations were laid, but he would be proud and delighted with this imposing building and with the ambitions that it promises to fulfill.”

Former President Bill Clinton was accompanied on his visit by his daughter, Chelsea.

In his speech, Mr Clinton stressed the importance of the special relationship not only between Britain and America, but America and Europe in an age of globalisation. Quoting the civil rights leader Martin Luther King, he described how all the people of the world are bound together in an “inescapable web of mutuality” and needed to work together to overcome the global AIDS pandemic, poverty and third world debt. He also spoke of the threat which industrialization is posing to the environment, and said that, as evidenced by the fact that the world has just passed through its hottest ever decade, damage to the environment is a global issue on which all nations should cooperate.

Looking to the future, Mr Clinton described how: “Our children will live in a time when a cure for cancer is discovered, and they will finally find out what is inside the black holes of the universe. The great test of our age is whether we can expand our minds and hearts to meet this challenge and understand that our interdependence is more than a slogan and about far more than money.”

Former President Clinton was shown around the new Institute by Professor Alan Ryan, the university's Chancellor, Lord Jenkins of Hillhead, and the Vice-Chancellor, Sir Colin Lucas.

Mr Clinton closed his speech by introducing Julian Harris, a 22-year old American Rhodes Scholar, who sang ‘The Star Spangled Banner’, ‘Go Down Moses’ and ‘Every Time I Feel the Spirit’ to the assembled guests, before final remarks were made by Director of the Institute, Professor Alan Ryan, who invited Mr Clinton to unveil the plaque which declared the Institute officially open.

Following the speeches, Mr Clinton toured the Institute and viewed a glass sculpture by the artist Julian Stocks, which symbolically depicts the relationship between Britain and America, before going on to a tea at Rhodes House hosted by Dr John Rowett, where he was introduced to many of Oxford’s 245 Rhodes Scholars. The day was brought to a close when the former President attended a formal dinner at New College in honour of the opening of the Institute.

The Founding Council of the Rothermere American Institute played a vital role in the development of the Institute, contributing substantially to the fundraising for the building and the Vere Harmsworth Library.

The Council included some of the United States’s and Britain’s most distinguished diplomats, business people and academic thinkers. It was brought together thanks to the tireless commitment of Vere, third Viscount Rothermere, his sister Lady Cromer and Mr Vyvyan Harmsworth. 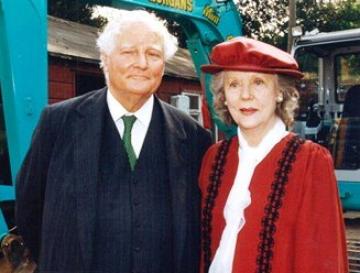