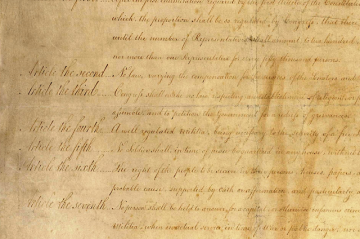 David Sehat, John G. Winant Visiting Professor of American Government, will deliver the 2018 Winant Lecture at the RAI at 5pm on Tuesday 13 February. His lecture is entitled 'Politics After God'.

Professor Sehat is a cultural and intellectual historian of the United States. An Associate Professor of History at Georgia State University, he writes broadly on American intellectual, political, and cultural life.  He is the author of The Jefferson Rule: How the Founding Fathers Became Infallible and Our Politics Inflexible (Simon and Schuster, 2015) and The Myth of American Religious Freedom (Oxford, 2011; updated edn. 2015), which won the Frederick Jackson Turner Award from the Organization of American Historians.

The John Gilbert Winant Visiting Professorship in American Government, based at the RAI and associated with Balliol College, is named after John ‘Gil’ Winant. Having been Governor of New Hampshire, he was appointed as first head of the Social Security Board by President Franklin D. Roosevelt in 1935. He served with great distinction as United States Ambassador to the Court of St. James from 1941 until 1946 and was instrumental in forging the wartime alliance between the US and Great Britain. The Winant Professorship was generously established by Ambassador Winant's son and daugher-in-law, Rivington and Joan Winant.