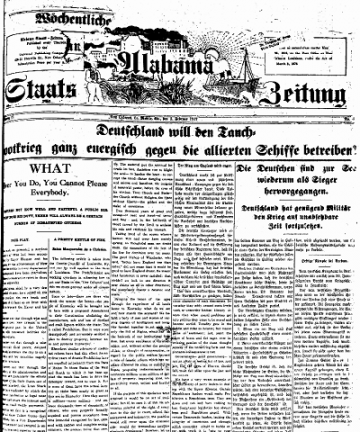 The RAI's Vere Harmsworth Library has acquired access to two new e-resources for Bodleian readers: African American Newspapers (1827-1998) and Ethnic American Newspapers (1799-1971). These collections are made available thanks to a generous donation from the Association of American Rhodes Scholars.

African American Newspapers, Series 1 (1827-1998) encompasses 280 newspapers from 35 states, including many rare and early titles. Published by and for African Americans, these titles document the African American experience at first hand and represent valuable primary sources for a whole range of disciplines.

Ethnic American Newspapers (1799-1971) features over 130 titles in languages including German, Japanese, Italian, and more. The challenges and opportunities encountered by various ethnic groups changed significantly across more than a century and a half, as this collection reveals in their own words.

Further information can be found on the VHL's blog post.

The RAI and VHL would like to thank the association of American Rhodes Scholars for its generosity in funding these acquisitions.