Farewell to Huw David on his last day at the RAI 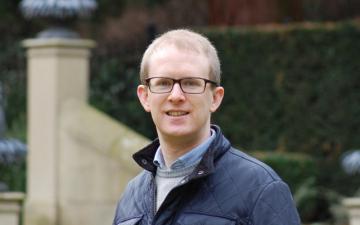 The RAI is sorry to say goodbye today to Huw David, who has been the Institute's Director of Development for the past seven years. During his time at the RAI, Huw led and managed the Institute's multi-million pound fundraising campaign, which since its launch in 2012 has raised £11.5m to increase the Institute's endowment and fund new activities and initiatives. The funding secured by Huw has enabled the Institute to offer graduate scholarships, travel awards, lecture series such as the John J. Louis Jr. Lecture in Anglo-American Relations and those commemorating the centenary of US involvement in World War I, online resources for the Vere Harmsworth Library, and most notably, the endowment of the new Edward Orsborn Professorship in US Politics and Political History, which will incorporate the Directorship of the RAI from October 2019.

Prior to joining the Institute's staff, Huw was a part of the RAI community as a student while completing a doctorate in Anglo-American history at Lincoln College, Oxford, during which time he convened the RAI's Graduate Seminar in American History and organised an international conference: 'Building an American Empire, 1783 - 1861'. He has since published his doctoral thesis as a book with the University of South Carolina Press. Trade, Politics, and Revolution: South Carolina and Britain's Atlantic Commerce, 1730-1790 recently received the 2018 George C. Rogers Jr. Prize for the best book of South Carolina history, given by the South Carolina Historical Society. The manuscript of the book was previously awarded the Hines Prize in 2015 by the College of Charleston, given biennially for the best first manuscript on a topic relating to the Carolina Lowcountry and/or the Atlantic World.

As he leaves, Huw writes: "It has been a privilege and a pleasure to spend seven happy years at the RAI. Special thanks are due to all my colleagues, who have made the Institute such a dynamic and friendly environment, in particular the three outstanding Directors I’ve worked alongside – Nigel Bowles, Jay Sexton, and Hal Jones – and VHL Librarian, Jane Rawson. In my new role at Wolfson College I will not be far away, and I look forward to returning to the RAI for its stellar lectures and public events."

Huw leaves the RAI to join Wolfson College as Development Director. All at the RAI wish him every success in his new role!