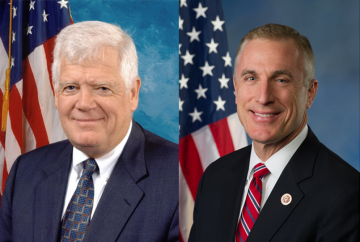 On Thursday 8 March, the RAI welcomes former US Congressmen Jim McDermott (D-Washington) and Tim Murphy (R-Pennsylvania) for Congress to Campus. Each year, the event brings two former members of Congress to the Institute to discuss American politics and government with local school and university students. It is organised with the US Association of Former Members of Congress and the Eccles Centre for American Studies at the British Library.

Jim McDermott (left of picture) represented Washington's 7th congressional district between 1989 and his retirement in 2017, wining re-election eleven consecutive times in one of the United States's most strongly Democratic districts. The district includes most of Seattle, together with adjacent suburbs. Originally a psychiatric doctor, McDermott served in the US Navy Medical Corps and as a foreign service medical officer in central Africa. During his career in Congress, McDermott was Chairman of the House Ethics Committee between 1993 and 1995 and was assigned to the Committee on Ways and Means and the Committee of the Budget. He sponsored numerous pieces of legislation, notably to combat violence against women and to promote trade with sub-Saharan Africa.

Tim Murphy (right of picture) was Member of Congress for Pennsylvania's 18th congressional district between 2003 and his resignation in 2017, a district encompassing suburbs of Pittsburgh and more rural counties in the south and west of the state. Born and raised in Ohio, Murphy worked as a psychologist before entering politics and took an active lead in Congress in promoting legislation concerning mental health issues. He served on the US House committees on Energy and Commerce, Veterans' Affairs and Government Reform.