The RAI congratulates research and teaching fellow Sally Bayley on the publication of her literary memoir Girl With Dove, released by HarperCollins on 17 May. Advance copies have had a warm reception from reviewers in the national press and elsewhere: 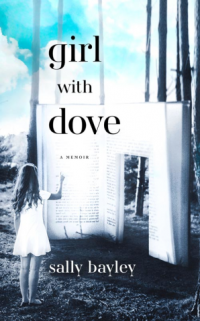 “It’s an astonishing tale, astonishingly written, in clear, precise prose that often echoes the rhythms of the nursery rhymes and stories she almost literally seems to have breathed.”
—Christina Patterson, The Sunday Times: full review

“What this book proves is how a child starved of stability can find it and be saved by good books. Bayley clearly was, and her resolutely cheerful memoir, itself a demonstration of the power of words and language, may save others who had similarly odd childhoods, of which they are still struggling to make sense.”
—Ysenda Maxtone Graham, The Times: full review (paywall)

“This is a memoir full of surprises. It’s intriguing, mesmerising and impressively written through the eyes of a child who relies on her literary heroines to guide her through her turbulent, formative years.”
—Sarah Broadhurst, LoveReading

A recorded discussion to accompany the release of Girl With Dove between Sally Bayley and a mentee of hers from Cherwell School, Georgie Newson, can be accessed via SoundCloud. She has also been interviewed about the book by the Sunday Times (paywall).

Girl With Dove recounts how the author escaped a disturbing upbringing by disappearing into a world of books and reading. Through reading, Bayley befriends heroes from Victorian literature: Jane Eyre and characters from David Copperfield become her saviours, offering her humour and guidance during difficult moments in her life. Weaving literary classics with a young girl’s coming of age story, the books testifies to the transformative power of reading and the literary imagination. Mixing fairytale, literary classics, nursery rhymes, and folklore, Girl With Dove is the story of a child’s adventure in wonderland and search for truth in an adult world often cast in deep shadow.

Sally Bayley’s previous books include The Private Life of the Diary (Unbound, 2016) as well as works on Sylvia Plath and Emily Dickinson. From September 2018, she will be teaching writing in Oxford as a Royal Literary Fund Fellow.