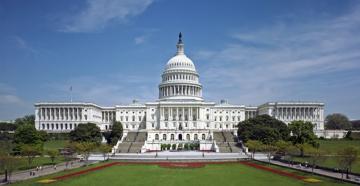 Hilary Term at the Rothermere American Institute begins with a special week of events on the current state of American politics as the United States' 45th President takes office.

On Wednesday 18 January at 1pm, the American Politics Graduate Seminar welcomes Deborah Cameron, Rupert Murdoch Professor of Language and Communication, Faculty of English and Worcester College, to discuss 'The Taming of the Shrill: Gender, Language and Power in the 2016 U.S. Presidential Election'. On Friday 20 Janaury at 1pm, Geoff Shephard, a former staff member of President Nixon's administration and the author of The Real Watergate Scandal: Collusion, Conspiracy and the Plot that Brought Nixon Down, will speak on 'The Criminalization of American Politics, from Nixon to now’. The week culminates in a live-screening of Donald Trump's inauguration as President of the United States from 4pm on 20 January, with comment and analysis from Sidney Milkis, Winant Visiting Professor of American Government.

For more details of these and other forthcoming events at the RAI, see http://www.rai.ox.ac.uk/upcoming-events.