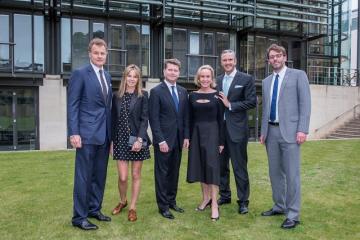 On Wednesday 25 April the RAI welcomed Matthew Barzun, U.S. Ambassador to the Court of St James's, to deliver the 2016 Ambassador John J. Louis Jr. Lecture in Anglo-American Relations. The occasion marked the 15th anniversary of the Institute's opening by President Clinton in May 2001.

In a wide-ranging lecture reflecting his own background in digital industries as well as a diplomatic perspective, the Ambassador cautioned against writing out "premature death certificates" for the special relationship between U.S. and U.K. Rather than expect monolithic joint positions on every issue, he argued, it should be preferable to take a less hierarchical view and focus on the shared values underpinning "a lasting love story".

The event was attended by Viscount and Viscountess Rothermere, whose family has been instrumental in the foundation and growth of the RAI. Lord Rothermere echoed the Ambassador's comments, describing the RAI and institutes of its kind as "the heartbeat of healthy learning and debate", and centres of free speech.