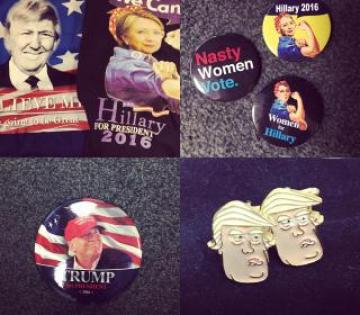 The Vere Harmsworth Library is home to the Philip & Rosamund Davies US Elections Campaigns Archive, an extensive collection of campaign ephemera from American elections at all levels.

The archive has been donated to the library by Professor Philip Davies (Former Director, Eccles Centre for American Studies at the British Library) and comprises a wide range of material, from buttons, posters, bumper stickers, flyers and leaflets to more unusual examples of campaign ephemera such as t-shirts, caps, dolls, rain bonnets, jewellery, bars of soap, playing cards, and commemorative plates.

The majority of the material dates from the later 20th century onwards, but there are examples of older items such as 19th and early 20th century campaign buttons, and ballots from the Civil War era. The archive continues to grow as Professor Davies actively collects and donates material from each round of elections in the United States.

The archive has been partially catalogued, which can be viewed on the collection's catalogue page. For queries related to non-catalogued materials within the archive, or requests to view items, please contact the Vere Harmsworth Librarian at bethan.davies@bodleian.ox.ac.uk.