Each year, the RAI hosts the annual Esmond Harmsworth Lecture in American Arts and Letters, the centrepiece of the university’s American literary calendar. Made possible by the generosity of Esmond V. Harmsworth, the lecture has been given by some of America's leading novelists, poets, playwrights, and literary critics, including Richard Ford, Joyce Carol Oates, C.K. Williams, Tobias Wolff, Marilynne Robinson, Jennifer Egan, Lydia Davis, Hilton Als, and Claudia Rankine.

The lecture has been given by:

2018 – Claudia Rankine: The Counter-Narrative, the Racial Imaginary, and Visual Art

2011 – Marilynne Robinson: Where are we? What are we doing here? Night Thoughts of a Baffled Humanist

2008 – Lorrie Moore: Random Things One Can Learn from a Visiting Writer

2007 – Robert Venturi: Architecture as Paradox within the Urban Complex 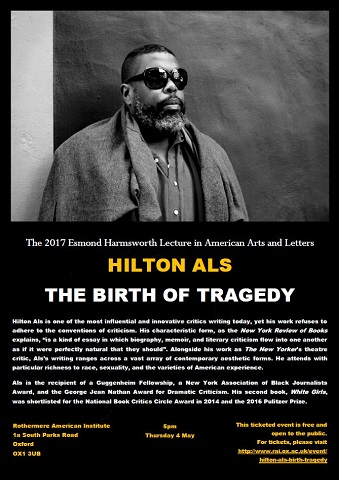