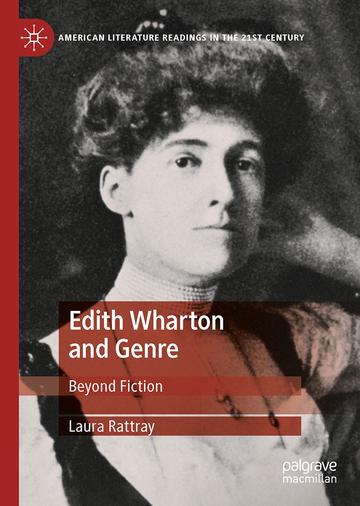 Join us for a discussion of Laura Rattray's acclaimed new book with an international panel of Wharton experts.

Based on extensive new archival research, Edith Wharton and Genre: Beyond Fiction (Palgrave Macmillan, 2020) offers the first study of Wharton’s full engagement with original writing in genres outside those with which she has been most closely identified. So much more than an acclaimed novelist and short story writer, Wharton is reconsidered in this book as a controversial playwright, a gifted poet, a trailblazing travel writer, an innovative and subversive critic, a hugely influential design writer, and an author who overturned the conventions of autobiographical form. Her versatility across genres did not represent brief sidesteps, temporary diversions from what has long been read as her primary role as novelist. Each was pursued fully and whole-heartedly, speaking to Wharton’s very sense of herself as an artist and her connected vision of artistry and art. The stories of these other Edith Whartons, born through her extraordinary dexterity across a wide range of genres, and their impact on our understanding of her career, are the focus of this new study, revealing a bolder, more diverse, subversive and radical writer than has long been supposed.

Jennifer Haytock is professor of English at SUNY Brockport and the Edith Wharton Society Vice President. Among other works, she has published Edith Wharton and the Conversations of Literary Modernism and co-edited (with Laura Rattray) The New Edith Wharton Studies. She is the volume editor for The Complete Works of Edith Wharton, Volume 24, The Children. She is also one of SUNY’s 2019 winners of the Chancellor’s Award for Excellence in Scholarship.

Julie Olin-Ammentorp is Professor of English at Le Moyne College. She is the author of Edith Wharton, Willa Cather, and the Place of Culture (2019) and Edith Wharton's Writings from the Great War (2004). In addition, she has published over twenty-five articles, including essays in Edith Wharton in Context (2012) and Edith Wharton's The Custom of the Country: A Reassessment (2010), both edited by Laura Rattray; in Willa Cather and Modern Cultures (2011); and in journals as varied as Letterature d'America: Rivista Trimestrale and The Henry James Review. She is a member of the Board of Governors of the Willa Cather Foundation and a past president of the Edith Wharton Society.

Emily Orlando is Professor of English and the E. Gerald Corrigan Chair in the Humanities and Social Sciences at Fairfield University in Connecticut (USA). She has published on 19th- and 20th-century literature and visual culture and especially Edith Wharton, Oscar Wilde, Nella Larsen, and Elizabeth Siddall. Orlando is the author of Edith Wharton and the Visual Arts (2007). With Meredith Goldsmith, she edited Edith Wharton and Cosmopolitanism (2016). Orlando is a Past President of the Edith Wharton Society. She is currently editing The Bloomsbury Handbook to Edith Wharton. Dr. Orlando curated the Edith Wharton installation for Chicago’s American Writers Museum, which focuses on The Age of Innocence.

This event is open to all.