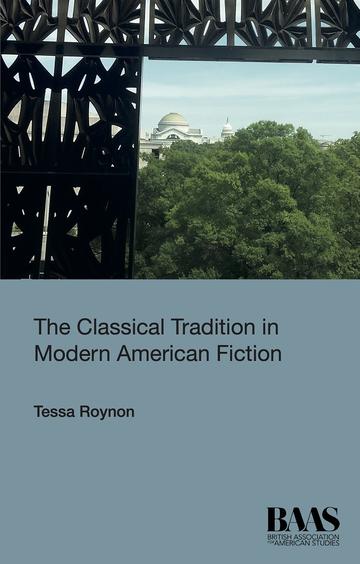 Join us for a discussion of Tessa Roynon’s acclaimed new book The Classical Tradition in Modern American Fiction (Edinburgh University Press, 2021) with an international panel of experts in American and Classical literature.

The Classical Tradition in Modern American Fiction is an invaluable survey of the allusions to ancient Greek and Roman culture in the work of seven major modern American novelists: Willa Cather, F. Scott Fitzgerald, William Faulkner, Ralph Ellison, Toni Morrison, Philip Roth and Marilynne Robinson. Making the classical world accessible to all readers, it combines new close readings of three key texts by each author with overviews of the essential prior scholarship in the field. It also builds on archival research in documenting the nature and extent of each author’s own familiarity with classical literature and languages.

You can read more about the book on the Oxford Arts Blog.

This event is open to all: please register here.

Tessa Roynon is currently a member of the English Faculty and is in her final year as a senior research fellow at the RAI. She is the author of two previous books on Toni Morrison, including the prize-winning monograph, Toni Morrison and the Classical Tradition published in 2013. She is also the co-editor of African Athena: New Agendas (2011), a special issue of the International Journal of the Classical Tradition on Ovid and Identity in the Twenty-First Century (2019), and of the forthcoming essay collection, Global Ralph Ellison. Now in the next phase of her career, she is Librarian at the Swan School (a new comprehensive in Marston, Oxford), where she is founding the Library from scratch. She is also completing the MA in Librarianship at UCL. She hopes that her next book will be a biography of her great great grandmother, Sarah Massiah, who was born in Barbados in 1837.

Kasia Boddy is Reader in American Literature at Cambridge University. She has published widely on American literature and culture, and is currently working on a book on the decennial census.

Stephen Harrison has been a Fellow at Corpus Christi College, Oxford since 1987, as Tutor in Latin there 1987-2020, and am now a Senior Research Fellow there and honorary Professor of Latin Literature in the Classics Faculty. He is an occasional visiting professor at the Universities of Copenhagen, Trondheim and Stellenbosch and have been a visiting professor/fellow at Princeton IAS, Stanford, Bergen, La Sapienza (Rome), Tel Aviv and the Universities of Canterbury and Otago in New Zealand. His main research interests are in Latin literature and its reception, particularly Augustan poetry (especially Vergil and Horace), the Roman novel (especially Apuleius) and neo-Latin (especially George Buchanan). Recent co-edited volumes include Roman Receptions of Sappho (OUP, 2019), Seamus Heaney and the Classics: Bann Valley Muses (OUP, 2019), and Cupid and Psyche: The Reception of Apuleius’ Love Story since 1600 (De Gruyter, 2020). For a full publication list see http://users.ox.ac.uk/~sjh/.

Michael Kalisch is a Departmental Lecturer in English and American Literature at the University of Oxford. His first book, The Politics of Male Friendship in Contemporary American Fiction, will be published by Manchester University Press later this year.

Julia Adamo graduated from Kenyon College in May 2020 with a Bachelor of Arts in English after completing her honors thesis, A Portrait of the Artist as a Young Woman: Coming-of-Age Narratives of Women Artists in Contemporary American Literature. She spent her junior year at the University of Oxford, where she studied English at Mansfield College and had the pleasure of taking two tutorials with Tessa Roynon at the Rothermere American Institute. While studying Classical Reception in the Modern American Novel, she read Tessa’s manuscript for The Classical Tradition in Modern American Fiction alongside many of the primary texts and her own research. Julia currently works at a bookstore in Massachusetts and is interested in returning to England someday to pursue graduate studies.