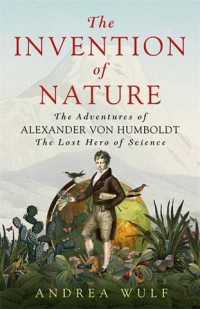 Andrea Wulf’s The Invention of Nature (John Murray, 2015) reveals the profound influence of German naturalist and explorer Alexander von Humboldt (1769-1859) on the way we understand nature today. His achievements almost forgotten, his name still lingers everywhere, from the Humboldt Current to the Humboldt penguin. Charles Darwin thought him ‘the greatest scientific traveller who ever lived’, while to Simón Bolívar he was ‘the real discoverer of South America…since his work was more useful for our people than the work of all conquerors’.

The Rothermere American Institute welcomes author and historian Andrea Wulf for the second instalment of RAI Live, a new series designed to foster exchange between audiences who might not otherwise meet. The session will feature a reading from The Invention of Nature, recently named Costa Biography of the Year, 2015. This will initiate a conversation between the author and Yadvinder Malhi, Professor of Ecosystem Science at the School of Geography, chaired by Eduardo Posada-Carbó, Professor of the History and Politics of Latin America at the Latin American Centre. Discussion will then open to an audience from the university and beyond.

Andrea Wulf trained as a design historian at the Royal College of Art. Her books include The Brother Gardeners: Botany, Empire and the Birth of an Obsession (2008) and Chasing Venus: the race to measure the heavens (2012). She has lectured at both the Royal Geographical Society and Royal Society.

Eduardo Posada-Carbó trained in law in Colombia and edited a newspaper before becoming an academic historian. His interests centre on the Colombian Caribbean and the history of democracy in Latin America.