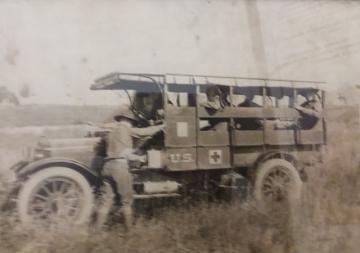 The Norton-Harjes Ambulance Corps was organized as an Anglo-American volunteer unit in October 1914, and it operated with the French Army on the Western Front over the next three years. Its members became known as the Gentlemen Volunteers, and its reputation rests largely on the number of important writers who joined the group.  The popular balladeer Robert W. Service, novelist John Dos Passos, poet and memoirist E. E. Cummings, playwright and screenwriter John Howard Lawson, and the Pulitzer Prize-winning poet Robert Hillyer are the most significant figures, mainly young men with ties to Harvard University, whose students were attracted by the elite standing of the Corps and by Harvard’s gentlemanly tradition of cultural and humanitarian service.

Focused study of the writers and the milieu in which the Corps operated presents new ways of understanding the development of Anglo-American modernism from nineteenth-century intellectual and philosophical sources. A specific line of inquiry is how notions of moral purpose and humanitarian service find their way into these men’s war writings, and how much the subject matter and innovative form of their work can be read as fashioning a modernist aesthetic within these older concepts. The war-related publications of these writers range from popular verse to experimental fiction and radical drama. Examining the moral and intellectual traditions underpinning their work is crucial to understanding how their war experience was shaped by inherited values of duty and honour, and then refashioned into new forms of literary production that both challenge and reinforce those values.