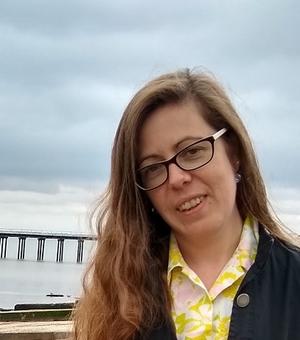 Karen is a policy historian who specialises in the twentieth- and twenty-first-century United States, with particular interests in the study of institutions and how through them, humans attempt to effect, advance, or prevent change. So far she has focussed principally on arts policymaking, but she is increasingly interested in outer space policy too.

Karen is currently writing a monograph entitled Conservatives, Liberals, and the Politics of Federal Arts Funding, from the Great Society to the Culture Wars. This work uses the case of the National Endowment for the Arts (the federal agency that provides grants to artists and arts organisations in the United States) as a lens through which to explore the intertwined trajectories of both conservatism and liberalism in post-World War II America. She is also working on conceptualising her second book project on NASA and human resources.

Karen enjoys collaborative working and project management and was the lead for Lunar: We Look to the Moon, an exhibition and associated public engagement event that marked the 50th anniversary of the first crewed mission to land on the Moon (20th July 1969). Hosted by the Bodleian Libraries, the project brought together a multidisciplinary team of academics from the Department of Earth Sciences, the Department of Physics, and the Oxford Internet Institute’s Cabinet team. She is currently editing a special issue of the European Journal of American Culture drawing on certain talks delivered at this event. Karen was also co-organiser (with Amanda Niedfeldt) of the Arts Patronage in Modern America conference held at the Institute and St Anne’s College, 26-28 June 2019. She is working on a publication arising from this event too.

Karen has written journal articles on Great Society liberalism and the early years of the National Endowment for the Arts, and on Daniel Patrick Moynihan and federal architectural policy. Other publications include chapters on Culture Wars over the modern Biblical epic, and on the Broadway theatre producer Roger L. Stevens. Karen has also written on conservative artists in the 1950s and is completing a chapter on private/public arts partnerships in the long Great Society era.

Karen has given invited papers at Queen Mary, University of London, and at the University of Glasgow. In July 2019 she was a guest on BBC Radio Oxford’s Time Out with Laurie Bailey where she discussed the cultural significance of the Apollo XI Moon landings. Karen also undertakes public lectures, outreach, and engagement activities with cultural partners in the Oxford area, such as the Ashmolean Museum and the Oxford Playhouse.

She teaches the history of the United States from 1863 to the present day, including undergraduate tutorials, and occasional lectures and graduate seminars. She also offers dissertation supervision on modern and contemporary US history topics, including art, film, the Culture Wars, and food history, amongst other topics. Karen was an Ashmolean Teaching Fellow in 2018 and 2019 and she is keenly interested in object-based pedagogy. To this end she is currently co-authoring (with Sarah Griffin) an article on learning through museum displays. Karen additionally teaches for the Department for Continuing Education where her specialist courses have focussed on the United States in the 1960s, 1970s, and 1980s, and most recently, the history of the Hollywood film industry. She also acts as an examiner for the department’s Foreign Service Programme (graduate degrees in Diplomatic Studies for practicing diplomats).

Karen is an Associate Senior Common Room Member at Lady Margaret Hall. Since 2018 she has served as Treasurer for the Historians of the Twentieth Century United States (HOTCUS). She also serves on the Richard E. Neustadt Book Prize Committee of the American Politics Group (APG).