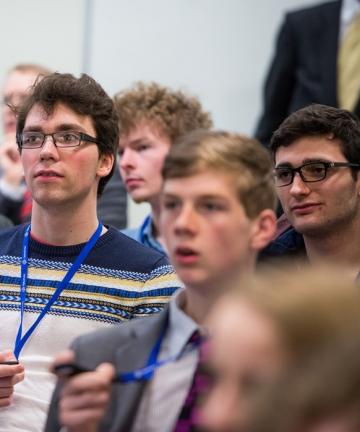 Each year, the RAI hosts Congress to Campus. This day-long event brings two former Members of Congress - one Democrat, one Republican - to the Institute to discuss American politics and government with local school and university students. It is organised with the US Association of Former Members of Congress and the Eccles Centre for American Studies at the British Library, with support from the US Embassy, London.

The format makes it possible to welcome all to this edition, although the event remains tailored to sixth-form and undergraduate students. Any questions from schools can be addressed to comms@rai.ox.ac.uk.

Click here to register. Please use an institutional email account (school, university, etc.) to register if you have one, as this will help us to understand who attends our online events.

The former Members of Congress offer local school and university students insights into how American democracy works through sharing their real-life experiences as candidates and office holders. For example, when former Congressmen Bob Carr (D-Michigan, 1975-81, 1983-95) and Cliff Stearns (R-Florida, 1989-2013) visited they discussed bipartisanship in the US House and Senate, the influence of partisan news media on US politics and the impact of ‘Super-PAC’ fundraising on American elections at local, state and Federal level, and answered questions on all these topics from the visiting students.

If you are a student, or teacher at a local school, and would like to find out more about participating in Congress to Campus, please email enquiries@rai.ox.ac.uk.

Former Members of Congress who have visited the RAI through Congress to Campus: