We are pleased to announce joint winners for this year’s Carwardine Prize, awarded to the outstanding student on the M.St. course in US History: Gwion Wyn Jones and Josh Lappen.

The Carwardine Prize was established by a donation from the William S. Broadbent Family, and the RAI is very grateful for this generous support. It is named in honour of Professor Richard J. Carwardine, FBA, Rhodes Professor Emeritus of American History at Oxford and Distinguished Fellow of the RAI.

Read more about Gwion and Josh’s research below. 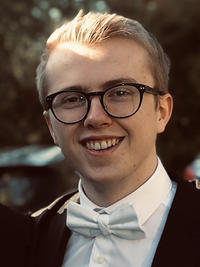 Given its centrality to the development of the United States, it is tempting to consider the Civil War as a ‘Manichaean’ clash of competing visions for the nation’s soul – of freedom against bondage, North against South, Yankee against Dixie, blue against grey. The Border States – Maryland, Delaware, Missouri, and Kentucky – defied these strict dualisms. Despite being culturally, economically, and demographically ‘southern’, these slave states rejected secession, depriving the Confederacy of both crucial resources and much-needed political legitimacy.

My master’s thesis explored how evangelical preachers in these four states persuaded their congregants to remain loyal to the Union. Comparing sermons from across the Border States, I identified heretofore unacknowledged connections between the rhetoric of border preachers, who often found themselves promulgating the gospel of Union to slaveholding audiences hostile to Lincoln and his so-called ‘Black Republicans’.

My research unearthed several arguments and themes that distinguished border Unionist preaching from its Northern counterpart. For example, the theological precepts of evangelical Protestantism lent themselves comfortably to the conservative propensities of border politics, allowing preachers to communicate Henry Clay’s tradition of compromise through the idiom of temperance and Christian moderation. Furthermore, border preachers ‘de-northernised’ the Union by stressing the republic’s chiliastic role in inaugurating Christ’s Second Coming, making loyalty an expression of Christian devotion and not a sign of submissiveness towards the Yankee.

One of the most fascinating findings of the thesis was how distinctly ‘southern’ Unionist preaching was on the border. Pro-Union preachers consistently invoked rhetorical leitmotifs historians have traditionally associated with the Confederacy; they commonly invoked southern ‘honour’ by castigating secessionists for their craven dishonour, and praised southern Unionists for exemplifying those masculine qualities of self-restraint that ‘effete’ secessionists supposedly lacked. Consequently, my research seriously challenges historical interpretations that too readily conflate Northern and Southern nationalisms with the Union and Confederacy respectively.

My thesis research examines the electrification of greater Los Angeles, tracing electricity’s critical, underappreciated role in the region’s political development, geographical cohesion, and cultural maturation.  Between the early 1880s, when downtown Los Angeles installed Southern California’s first crackling electric lights on favored street corners, and the 1930s, when over a million Angelenos came together to celebrate the arrival of Hoover Dam power with a spectacular electric parade, electricity became not just a fact of daily life, but also an influential factor in urban and rural politics, identities, and landscapes.

Electricity was introduced to greater Los Angeles by land speculators who harnessed electric power to sell property, emphasise the region’s modernity, and promote white inmigration. When orchestrators of the city of Los Angeles’ now-infamous Owens River Aqueduct employed the prospect of abundant hydropower to obtain voter backing, electricity gained enduring political valences which helped to universalise it in regional culture. As land barons, electric company executives, and public servants all used not just electrical devices but the notion of electricity itself to shape the region’s expansion, they crafted electricity into a cultural symbol of modernity which outlasted its actual novelty by decades.

In my thesis, I use greater Los Angeles’ electrical history to reconceive of electrification as an ongoing cultural and political process rather than a purely technical event. By examining electricity’s shifting role in daily life, my thesis is able to track its influence in corporate decision-making, political messaging, and regional self-image even as electricity receded into the background of everyday life. Likewise, by tracing the contentious politics of electrical ownership, my thesis rewrites the history of electrical adoption, replacing a narrative of seemingly preordained economic growth, visionary entrepreneurship, and technological development with a more nuanced account of electrical living.