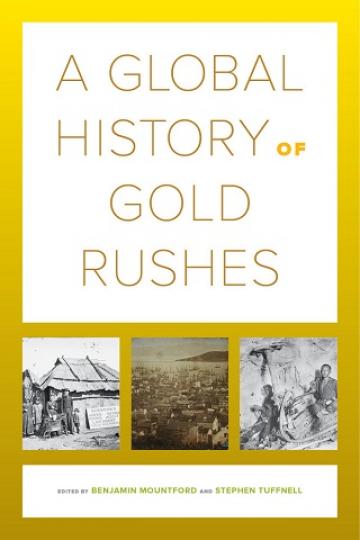 The RAI congratulates Stephen Tuffnell (Oxford) and Benjamin Mountford (ACU Melbourne) on the publication of their edited collection, A Global History of Gold Rushes (University of California Press, October 2018).

Between the discovery of California placer gold in 1848 and the rush to Alaska fifty years later, the search for the precious yellow metal accelerated worldwide circulations of people, goods, capital, and technologies. A Global History of Gold Rushes brings together historians of the United States, Africa, Australasia, and the Pacific World to tell the rich story of these nineteenth century gold rushes from a global perspective. Gold was central to the growth of capitalism: it whetted the appetites of empire builders, mobilized the integration of global markets and economies, profoundly affected the environment, and transformed large-scale migration patterns. Together these eleven essays tell the story of fifty years that changed the world.

The volume builds on a conference held at the RAI in April 2015, titled 'Gold Rush Imperialism: Gold Mining and Global History in the Age of Imperialism, c.1848-1914'. The conference page and programme can be viewed here.

Benjamin Mountford, Senior Lecturer in History at the Australian Catholic University in Melbourne, is the author of Britain, China, and Colonial Australia and co-editor of Fighting Words: Fifteen Books That Shaped the Postcolonial World. He was formerly a David Myers Research Fellow at La Trobe University (2017-18).

Stephen Tuffnell, Associate Professor of Modern US History at the University of Oxford, is currently completing Emigrant Foreign Relations: Independence and Interdependence in the Atlantic, c. 1789–1902. He researches US history from a global perspective.