Call for Papers: The American Century? International History and Diplomacy in the 20th Century 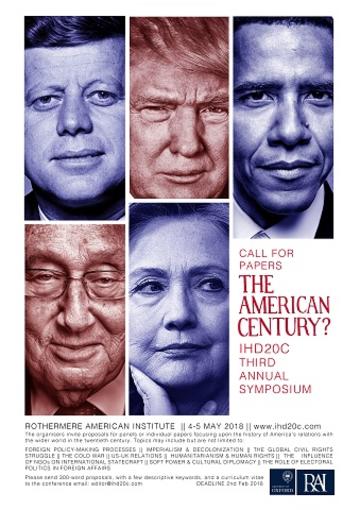 On 4 and 5 May 2018, the RAI will host the third annual International History & Diplomacy in the Twentieth Century symposium, dedicated to the study of diplomatic practice, statecraft, international relations and foreign policy-making in a global and/or transnational historical context. The organising committee welcomes papers and panels that offer traditional and fresh approaches to the study of foreign affairs in all its varied forms and formats. Advertised here, the organisers invite proposals for individual twenty-minute papers and complete, three-to-four-person thematic panel submissions from postgraduates, early career academics and established scholars alike. Topics may include but are not limited to the following:

Mindful of the Rothermere American Institute’s overarching research aim – of promoting ‘greater public and academic understanding of the history, culture and politics of the United States’ – we are particularly keen to encourage more specialised proposals focusing upon the history of America’s relations with the wider world in the twentieth century. Within this broad investigative framework, this year, IHD20C will explore the concept of ‘The American Century’ – a phrase first coined by media impresario Henry Luce, in a Life Magazine editorial, in February 1941, arguing not just for an end to US isolationism and entry into the Second World War, but also for the United States to assume what he judged to be its natural and rightful role as a ‘global moral beacon’ in world affairs. It will be a central objective of this symposium to assess the validity of this concept in American foreign relations; to analyse its importance to grand or established narratives and perceptions of twentieth century American history, and to ponder whether the election of Donald Trump to the White House in January 2017, does in fact mark, in the words of one commentator for The Atlantic, ‘…the death knell of the American Century’.

The conference organisers welcome papers that consider one or more of these issues. Panels submissions are expected to include a chair and consist of three papers and should be submitted by one person who is willing to serve as the point of contact. In addition to abstracts for each individual paper, panel submissions should also include a brief 150-word introduction describing the panel’s main theme. Please send 300-word proposals, with a few descriptive keywords, and a curriculum vitae to the conference email: editor@ihd20c.com

All submissions for inclusion must be received by Friday 2nd February 2018. Decisions on inclusion will be made by Friday 9th February 2018. Updates regarding the conference will be posted to the IHD20C website. It is hoped that participants will be able to call upon their departments for transportation expenses.