Congress to Campus One Year On 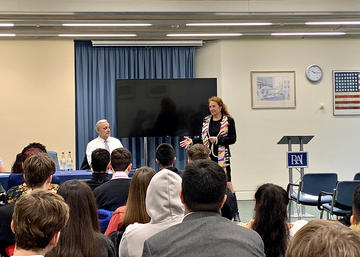 Congress to Campus is the centrepiece of the RAI’s programme to engage schools in the politics, history, and literature of the United States. Held in partnership with the British Library’s Eccles Centre for American Studies, the US Embassy in London, and the Association of Former Members of Congress, the initiative brings two former US Representatives to the UK and RAI each year to share their experience of working in Congress. As we prepare to host a virtual edition, Todd Carter, who oversaw last year’s visit, gives an account of the usual format.

He writes: Working closely with the wonderful team at the British Library’s Eccles Centre for American Studies, in March 2020 the RAI once again welcomed the Congress to Campus programme. During a six-day visit, Elizabeth Esty (D-CT) and Jeff Miller (R-FL), the two former members of Congress, addressed large groups of A-level students at London Metropolitan University and Wellington College; took part in a livestreamed question-and-answer session at the British Library; and, at the RAI, held a fascinating discussion of the US political scene with Professor Margaret Weir (Brown University and John G. Winant Visiting Professor of American Government), RAI Director Professor Adam Smith, and sixth-form students and teachers from schools across the country.

This year’s tour also saw, for the first time in the programme’s history, the two visiting members of Congress travel to the north-west of England, where they participated in two discussion events for students at Liverpool John Moores University; a sold-out public debate on the forthcoming US Presidential Elections at Waterstones bookstore in Liverpool, and a lively day-long conference—focusing on US domestic politics, foreign policy and judicial processes—in front of 120 Politics A-level students at Loreto College in Manchester. In combination with the November event, hosted and run by the Eccles Centre, the 2020 Congress to Campus programme reached an audience of just over 2,000 people. Fortunately for all concerned, this year’s tour was not derailed by COVID-19, nor did it overlap with the start of the nationwide lockdown in Britain or the United States.

Elizabeth Esty served as US Representative for Connecticut’s 5th congressional district, covering central and northwest Connecticut, from 2013–19. While in Congress, she served on the Committees on Veterans’ Affairs; Transportation and Infrastructure; and Science, Space, and Technology. She also served as Vice Chair of the US House Gun Violence Prevention Task Force and as co-chair of the bipartisan Problem Solvers Caucus’s infrastructure Task Force, and she was an active participant in the Aspen Congressional Program. Esty is the author of several dozen bills and amendments that were signed into law by both Democratic and Republican presidents.

As the primary organizer, I would like to extend my sincere thanks to Jeff Miller and Elisabeth Esty for sharing their first-hand experiences of working in the House of Representatives, and, for the financial support and assistance they provided, to the British Library’s Eccles Centre for American Studies, the US Embassy in London and the Association of Former Members of Congress. Equally, the programme is indebted to Dr Cara Rodway, Dr Phil Hatfield, Professor Phil Davies, Professor Andrew Moran, Professor Margaret Weir, James Dahl, Tarla Woolhouse, Ben Lewsley, Dr Matthew Hill, Dr Malcolm Craig, Dr Tom Tunstall Allcock, Dr Jonathan Parker, Stuart Robertson, and to all the other speakers and participants who helped make each event so successful and rewarding for the students who attended.

This year's virtual Congress to Campus will take place on 17 March at 5pm via Zoom. The format makes it possible to welcome all to this edition, although the event remains tailored to sixth-form and undergraduate students.

Click here to register. Please use an institutional email account (school, university, etc.) to register if you have one, as this will help us to understand who attends our online events.