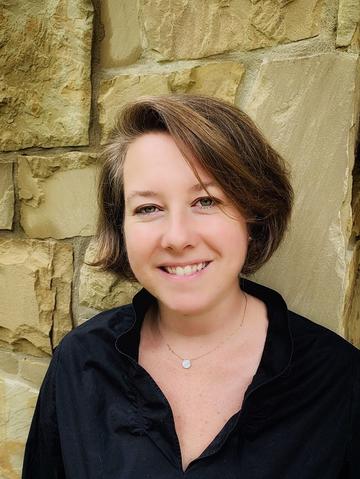 The RAI sits down with Professor Emily Burns – virtually, of course – to ask about her research and her experience at Oxford as the Terra Foundation Visiting Professor of American Art in this strange year. Emily is also a Visiting Professorial Fellow here at the RAI.

Please tell us about your current research project.
I’m working on US artists, writers, and travelers in fin-de-siècle Paris and a fraught and paradoxical transnational conversation that imagined American innocence as a key defining character. This has been an ongoing project since I developed my dissertation project in 2009, with a detour to let one of the chapters mushroom out into a book project (Transnational Frontiers: the American West in France, University of Oklahoma Press, 2018). While I’m an art historian by training, my methods are derived from cultural studies, so I’m interested in thinking about how ideas are built and shaped through dialogues across visual, material, literary, and popular culture.

What made you focus on this particular period of American art? Can you tell us what makes it so interesting?
The 1890s is the most interesting decade I can imagine, so you can imagine I was delighted when the Midnight in Paris characters travel back that far. If I could time travel it would be to visit a World’s Fair, ideally Paris 1900. Between the social and political complexities of the War of 1898 and a rising current of international US imperialism, discussions of Americanization in Europe, the Dreyfus Affair, shifting gender norms, new ideas about the operations of human psychology, debates about laicization in France, to name a few, and the eclectic simultaneous aesthetic practice in art making from academic to impressionism and symbolism, there’s a rich kaleidoscope of issues to address. Plus, the textual archive of this period is so rich – so many artists wrote letters home or kept diaries, which they often illustrated, one of the US artists’ clubs produced its own little magazine and the US colonists in Giverny also made one, and the number of newspaper articles discussing US artists in France knows no end even after more than ten years of collecting them. All the time in this material there are pithy quotations that make me laugh out loud. One favorite: in 1890, US writer and socialite Mary Elizabeth Wood Sherwood, who published articles under the name Mrs. John Sherwood in the North American Review, worried that impressionable “poor, innocent American flowers” would be easily swayed by flirtation and bohemian life abroad. She observed, with hysterical hyperbole: “more than eleven thousand virgins… semi-yearly migrate from America to Europe.”.

What led you to this research?
As a traveller myself, I was interested in pursuing a project that led to me think about mobility and circulation. While there have been a lot of studies on American artists in Paris, they have largely focused on aesthetics, such as thinking about how French training, and later French impressionism, is visible in US painting. Celebrations of Parisian bohemian life are often assumed. Also, scholars tend to spotlight artists who had amazing careers and integrated into cosmopolitan art networks, like James Abbott McNeill Whistler, John Singer Sargent, and Mary Cassatt. Yet these artists are not representative of the whole contingent of US artists working in Paris, and my broader research has uncovered a lot of resistance to French society and culture, which suggest in an interesting tension between Francophilia and Francophobia. Because there were so many Americans in Paris in this period and the archives in newspapers, letters, diaries, novels, and short stories are so rich, it is an ideal context to pursue questions of how contemporaries understood US identity through its cultural production and to think about transnational refraction in a period in which many assumed art and national character were somehow mirrored. Aesthetics are only one part of this discussion.

Do you have any advice for today’s graduate students in American History and History of Art?
What has made my study particularly rich and rewarding has been its interdisciplinarity and the ways I’ve found sometimes surprising connections across fields by engaging primary sources broadly. If I only read art history books and primary sources related to artists, I’d miss so much in my thinking about constructions of US culture in Paris. It can be overwhelming to read broadly in related cultural fields like literary studies, American studies, African American Studies, Native studies, and history, yet it is through that depth of reading that one can trace discursive histories and understand the mechanisms of culture.

This has been an unusual year to be the Terra Professor. Have you have found living and working in Oxford during the pandemic?
It has indeed been a strange time to move abroad. But I’ve been delighted to join the thriving online events community here, which has still enabled me to talk with some of the DPhil students in History of Art as well as the MSt students with whom I am working, and hear about working presented through the Rothermere American institute, the Department of History, and TORCH. I take a walk in the Port Meadow almost every day and have been lucky to form a support bubble with this year’s Eastman Professor. I have been disappointed not to be able to travel or to see my family who live in Somerset/Bristol, save one meal at the Trout just after I left quarantine with my cousin, but am hopeful to be able to see them in spring or summer. But the focused time for research and writing has been really productive, and I feel privileged to have the support to do so and to remain safely ensconced during the pandemic.

Emily Burns will give the Terra Lectures in American Art on the topic of Performing Innocence: US Artists in Paris, 1865-1914, from 17 February to 10 March 2021. The first lecture ‘Belated’ is on 17 February at 5pm and will be streamed live via YouTube: https://www.torch.ox.ac.uk/event/performing-innocence-belated