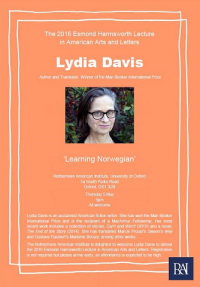 On 5 May the distinguished writer and translator Lydia Davis delivered the 2016 Esmond Harmsworth Lecture in American Arts and Letters to a large and enthusiastic audience. Davis has won several of the literary world’s most prestigious awards including the 2013 Man Booker International Prize and a MacArthur Fellowship. She was made a member of the American Academy of Arts & Sciences in 2005. This was her first visit to the Rothermere American Institute.

Davis’s lecture was titled ‘Learning Norwegian.’ Davis has translated Georges Simenon, Gustave Flaubert and Marcel Proust. Following in the footsteps of James Joyce (who learned to read Norwegian so he could read Ibsen), Davis decided to learn Norwegian. Her lecture explained how she did it. From scratch. Armed only with a copy of Dag Solstad’s Det Uoppløselige Episke Element i Telemark i Perioden 1591–1896.

Davis’s adventure proved fascinating. By way of introduction, she shared her personal history with foreign languages, beginning with a childhood year spent in Austria. She recounted how this early experience led to engagements with French, Spanish, Dutch, and ultimately Norwegian. Davis then described how she worked through the Norwegian text without the help of a dictionary or any other translation resource, often conjecturing the meaning of Norwegian words from their cognates in other languages. Davis’s methodical, determined yet playful approach mesmerised the audience. ‘Now I know why they call MacArthur fellows geniuses!’, one audience member exclaimed during the Q&A after the lecture.

The next day, Davis led an intimate workshop with a select audience of Oxford undergraduates, postgraduates and faculty. The discussion focused around two of Davis’s short stories (‘Letter to a Funeral Parlour’ and ‘The Two Davises and the Rug’) but extended to encompass creative methods, influences and much more. Davis offered glimpses into the personal experiences and methods that inform her fiction (yes, she really did send a letter to a funeral parlour). She was candid about her composition and editing process (unsurprisingly, she is not given to producing ‘sloppy’ first drafts and is a consummate reviser). The workshop provided a privileged insight into Davis’s creative world.