When the feminist and activist Gloria Steinem visited Oxford this Hilary term, her first stop was a reception jointly hosted by the RAI and Oxford Women in Politics (OxWIP). Steinem was in Oxford to discuss her new book, My Life on the Road, a candid memoir of her early years and her leadership in the global movement for equality.

Kathryn Olivarius, a D.Phil. candidate in American History, attended the reception. "I first saw Gloria Steinem speak almost a decade ago when I was a freshman in college, and she inspired me to wear feminism as a badge of honour and not shy away from fighting injustice," Olivarius said. Many of the event's attendees had similar stories to tell. They related how Steinem had inspired them to subscribe to Ms., the feminist magazine she co-founded with Dorothy Pitman Hughes in the 1970s. They talked about being taken to their parents' place of work in the 1990s as part of Take our Daughters to Work Day, a foundation Steinem started. They reminisced about the positive influence of Steinem's activism and books, such as Revolution from Within. They talked about the constructive effect she had had on their mothers and fathers, sisters and brothers.

Professor Michèle Mendelssohn, the RAI's Deputy Director, spoke about the significance of the RAI-OxWIP reception. "Ms Steinem has dedicated her life to the 'radical proposition' that women deserve the same opportunities to succeed in life as men. Professor Richardson is the first woman to hold the position of Vice Chancellor at Oxford University. We've been waiting over 700 years for this historic moment. The RAI has a pretty good track record by Oxford standards. But it is having a banner year. Tonight we are joined by the first woman Winant Professor of American Government in 7 years, Lisa Miller. Moving from 700 to 7 years is a sure sign of progress."

"And what about the RAI's Harmsworth Professors of American History? This year the RAI community has been enormously enriched by Prof. Kristin Hoganson’s contribution. For much of its history, the Harmsworth Professorship was held by men. But in the last decade, the gender balance has shifted towards equality: 5 women and 5 men. We should all be pleased about this."

It was meaningful to have the chance to meet Steinem in the company of Oxford women and men. Dr Stephen Tuffnell said he was enthused to hear about OxWIP's ideas and interests, as well as "to see their engagement with the ever-prescient work of Gloria Steinem, one of the preeminent feminist intellectuals of the United States."

Before addressing a packed audience at the Oxford Union, Steinem sat down with university staff and students for an intimate conversation about feminism today. "It's not every day that you get to host a feminist icon," the OxWIP President, Rebecca Fradkin, said. With Vice President Sebabatso Manoeli, Fradkin leads the university's premier society dedicated to advancing the role of women in public and professional life. Fradkin and Manoeli are D.Phil. candidates in Politics and History, respectively.

RAI and OxWIP colleagues were envigorated by the evening. Rhodes Professor of American History, Pekka Hämäläinen, declared it a success. Olivarius noted that the 81 year old "Steinem is as energetic as ever – battling the patriarchy with confidence and contagious energy."

"We're finally realizing there are dreams of our future that are possibilities," Steinem tweeted from Oxford. In the city of dreaming spires, there is good reason to hope that equality is no longer a dream. 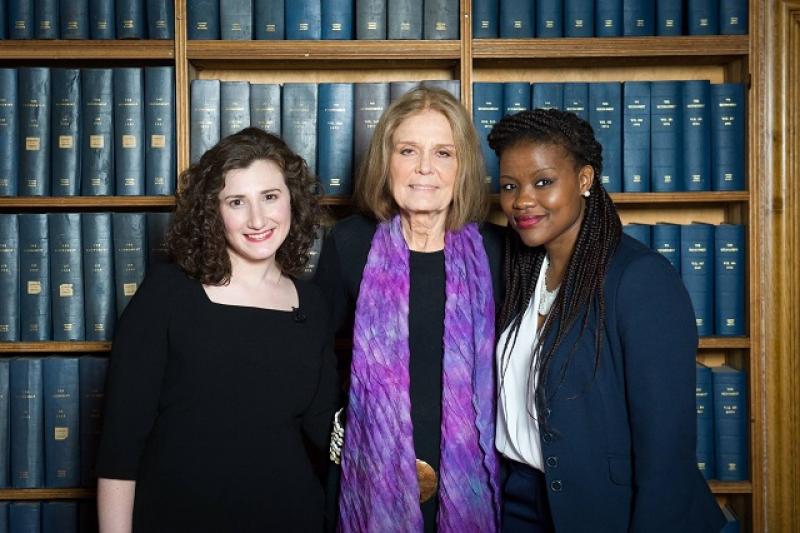