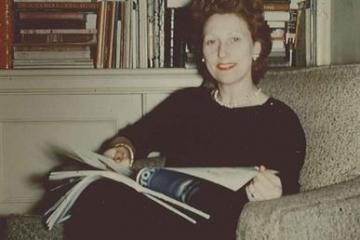 The Rothermere American Institute was deeply saddened to learn of the death of Mrs Drue Heinz, DBE, on 30th March 2018 at the age of 103. An outstanding philanthropist and patron of the literary arts, she was a generous benefactor of the RAI and a member of the Institute's Founding Council. She endowed Oxford University's Drue Heinz Chair in American Literature, a position associated with St John's College.

Born during World War I in England on March 8, 1915, Drue Heinz was the widow of the late H.J. Heinz II of Pittsburgh, Pennsylvania.

In the United Kingdom, she was a Trustee of the Royal Academy of Arts and, as a member of the London Library, created an endowment there to develop its literary collections. In 1983, she founded the Hawthornden Literary Retreat in Midlothian, Scotland, as an international retreat for writers.

In 1995, Mrs Heinz was named an Honorary Dame Commander of the Order of the British Empire and in 2002 she was elected as an honorary fellow of the Royal Society of Literature.

In the United States, she endowed the Drue Heinz Literature Prize at the University of Pittsburgh, a national prize for short stories, and was an active board member of the Carnegie Museum of Art, the Metropolitan Museum of Art, the MacDowell Colony, the Pierpont Morgan Library, and the American Academy in Rome, and served on the International Council of the Museum of Modern Art. She joined the Board of Directors of the Howard Heinz Endowment in 1973, which later became The Heinz Endowments, and became Director Emeritus in 1994.

In 1971 she co-founded Ecco Press, which published Antaeus magazine and republished many out-of-print books of outstanding literary merit. She also served as publisher of The Paris Review from 1993 until her retirement in 2008.

Mrs Heinz most recently visited Oxford in November 2017 for the inaugural lecture of the Drue Heinz Professor of American Literature, Lloyd Pratt. It was an honour for all the RAI's staff and students to have her company for what was a memorable occasion.

Vyvyan Harmsworth, Secretary and Trustee of the Rothermere Foundation and Chair of the RAI's Board of Advisors said: "Drue Heinz was a personal friend of the late 3rd Viscount Rothermere and his sister, the Countess of Cromer. As a result of this friendship Lord Rothermere invited her to join the Founding Council of the RAI. Her deep knowledge and love of the United States influenced and enriched the development of the Institute. Her interest in the RAI never waned and her advice, encouragement, and philanthropy has greatly helped the Institute flourish during the past 15 years. She will be remembered with great affection and admiration by all who knew her at the RAI."