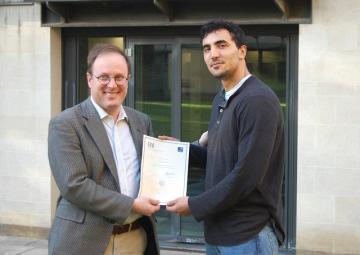 The RAI is pleased to announce that the Carwardine Prize for the outstanding student on the U.S. History M.St. course in 2017-18 has been awarded to Noah Remnick.

Stephen Tuck, Professor of Modern History, said "Noah Remnick explored various aspects of education, policing and the struggle for racial equality in the United States during his M.St. year. Noah's work was deeply researched, innovative and compelling. We are delighted that he is staying in Oxford to write a doctoral thesis in this important area of study." Having graduated from Yale University in 2015, Remnick arrived in Oxford as a Rhodes Scholar in 2017 and is now undertaking a D.Phil. at Balliol College on school policing, community resistance, and the history of the school-to-prison pipeline in the United States..

The Carwardine Prize is named in honour of Professor Richard J. Carwardine, FBA, Rhodes Professor Emeritus of American History at Oxford. It is awarded annually to the Master's student in U.S. History who is judged by the course convenors to be the outstanding overall student of the year. In selecting the recipient, the convenors consider not only final marks and ranking, but also the energy, enthusiasm, and enterprise that candidates brought to their research, studies, and seminar discussions over the course of the year.