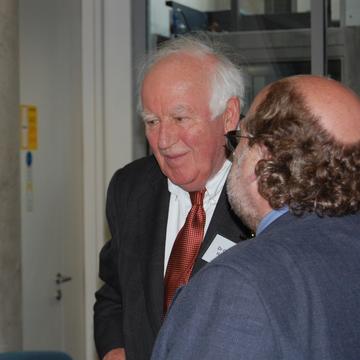 The RAI was greatly saddened to learn of the death of Godfrey Hodgson, a Distinguished Fellow of the Institute and an important friend, ally, and source of wise counsel throughout its first decade-and-a-half. Gareth Davies reflects on his career and association with the RAI.

Godfrey was part of a distinguished cohort of British reporters who covered the United States with unparalleled insight and depth of understanding during the 1960s and 1970s. Where he really stood out in this distinguished company was in the way that his immersion in American life provided the springboard for a whole series of perceptive books that went well beyond ably recording the dramatic events of the Sixties, but which delved more deeply into the history and fundamental character of the United States, a nation to whose people and promise he retained a deep (if not uncritical) attachment.

It is not remotely to disparage any of his other fifteen or so books to observe that by far the most influential among them has been Godfrey’s 1976 masterpiece, America in Our Time, a vibrant and intellectually scintillating portrait of American political history during the time of his decade-long sojourn as Washington correspondent for David Astor’s Observer. A half-century on, this remains one of the two or three indispensable starting-points for anyone seeking to master the dramatic events of the Kennedy-Johnson year. At a recent retrospective, Gary Gerstle (Mellon Professor of American History at Cambridge, and a former Harmsworth Professor at Oxford) aptly described America In Our Time as “one of the great works of American political and social history written in the past half century.”

Part of the power of this book comes from Hodgson’s reportorial skill – from the facility with which he reconstructs the principals in his drama, and the stage upon which they are performing.  Yet what he felt to be most responsible for the success of the book was his good fortune in having been a young reporter in a Washington that was populated by other talented and ambitious young men and women (David Halberstam coined the phrase “the best and the brightest”), some of whom became close friends. They gave him an exceptional level of access to national politics and (especially for an overseas reporter) a rare depth of understanding. Among his closest friends were Daniel Patrick Moynihan, an Anglophile Labor Department official who would go on to be arguably the nation’s greatest ever intellectual in politics, and Harry McPherson, a liberal Texan and senior aide to Lyndon Johnson.

Godfrey’s ability to win the friendship, trust and admiration of such luminaries was unsurprising, for he was a deeply sociable man, a bon vivant, a superb raconteur and – as all of that indicates – great fun to be around. To the RAI’s great good fortune, on returning from Washington in the 1970s he and his wife Hilary chose to make their home in west Oxfordshire. For many years, he would commute into London on the Cotswold Line, but then he became director of Oxford’s Reuters Institute for the Study of Journalism, on Norham Gardens.  When the RAI opened – just across the Parks from the Reuters Institute – Godfrey became a regular and greatly valued friend. During these early years, the History Faculty ran a Special Subject on the ‘Great Society’ era, and its classes at the RAI would conclude each December with a guest appearance by Godfrey, who would reminisce about his two interviews with Martin Luther King, about covering Freedom Summer in Mississippi, and about what it was like to have Robert Kennedy as a drinking buddy.

If conviviality was one of Godfrey Hodgson’s defining traits, then it was nowhere more evident than in the delight that he took in being surrounded by young people such as these Special Subject finalists – not just because they felt awed to be in his presence (although that was probably part of it!) but because he relished the privilege of exchanging ideas as well as memories with undergraduate and postgraduate students. It was partly in recognition of the value of these associations, not just to these students but to the RAI as an institution, that the Institute in 2009 elected Godfrey to be a Distinguished Fellow, and named one of its teaching rooms in his honour.

Additionally, and particularly during the directorship of Nigel Bowles, Godfrey’s distinguished and erudite presence enhanced all manner of RAI seminars and conferences, while the appreciative reaction of visitors such as Dan Rather and James T. Patterson reinforced one’s already clear sense that he was our most eminent and widely known Americanist. During the past few years, ill-health increasingly limited his appearances, but his refusal to yield to it – his indomitability – was impressive. Holed up in the John Radcliffe Hospital for several months, he and the publisher Jon Carpenter (a friend and neighbour) hatched the idea of a short book that he could write without extensive research – a lyrical tribute to the River Evenlode, near which he had lived (in Chastleton, Chilson, Finstock, and finally Charlbury) for some four decades.

Appropriately enough, Godfrey Hodgson’s final appearance at the RAI as a speaker came in 2016 when he keynoted a graduate conference about the career of Daniel Patrick Moynihan, attended by “Pat’s” daughter, Maura. (It was appropriate not only because of Godfrey’s long association with Moynihan but because the ex-Senator’s final endeavour before going into hospital for his final illness in 2003 had been to embark on a retirement tribute to Godfrey.) A sparkling event all round, the graduate organisers found it most notable for a bibulous and protracted lunch with Godfrey at Brown’s. Failing to persuade them to partake of a cocktail, he considered it a minor triumph when his abstemious confreres at least agreed to take some wine. Dan, Louisa and Paddy were rewarded with one of the great privileges of their graduate careers – two hours of reminiscences and witticisms from a master raconteur – one who had had the great good fortune to observe American history and politics at close quarters for six decades, and who – more than merely wishing to share his good fortune – greatly relished any opportunity to learn from academic colleagues who in different ways had been ploughing the same furrow.

Godfrey Hodgson will be enormously missed by his legions of friends and admirers. The RAI will never cease to be grateful for his many acts of generosity towards it, which included lodging his papers in the Vere Harmsworth Library, and for his role in its early development.