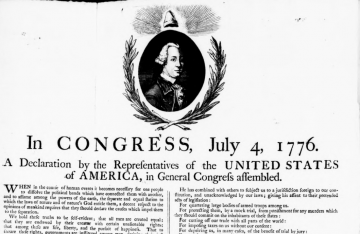 As the RAI celebrates Independence Day, we are pleased to announce that thanks to generous donations, Oxford library users now have access to two major digitised archives: ‘The American Revolution from a British Perspective, 1763-1783’ and ‘Congressional Hearings, 1824-1979’.

‘The American Revolution from a British Perspective, 1763-1783’ comprises some 83,000 pages of British pamphlets, sermons, and parliamentary debates relating to the American Revolution. Topics span debates over taxation, how questions of Quebec’s government affected pre-war relations between Britain and America, the hopes for and ultimate failure of conciliatory measures, and the uneasy post-war rapprochement between Britain and the newly independent United States. The collection will be an especially valuable resource for undergraduate history students taking one of Oxford’s specialist papers on early American history, which include ‘From Colonies to Nation: The History of the United States 1776–1877’, ‘The Age of Jefferson, 1774–1826’, and ‘Imperial Crisis and Reform, 1774–1784’.

‘Congressional Hearings, 1824-1979’ is a comprehensive resource including the full text of published committee hearings from the US Congress from 1824 to 1979. Published hearings are the official record of committee hearings  held to enable committees to gather opinions and information to help Members make decisions regarding proposed legislation or to help them fulfill their oversight and investigation responsibilities. Official hearings publications may include written and oral statements of witnesses, transcripts of question-and-answer sessions, reports and other materials submitted for the record, and correspondence and other materials submitted by interested parties.

The collections may be accessed via SOLO or the university's new Databases A-Z listing; university members can use single sign-on for remote access.

The Rothermere American Institute and the Bodleian Libraries are very grateful to the generous benefactors whose donations have made it possible to acquire these valuable online resources.