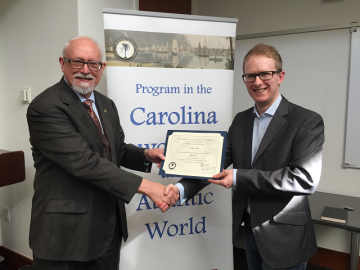 Having been awarded the Hines Prize for his book manuscript The Atlantic at Work: Britain and South Carolina's Trading Networks, c. 1730 to 1790 last year, RAI Director of Development Dr Huw David has visited the College of Charleston to receive the prize and deliver the associated lecture.

Endowed by former College of Charleston Dean, Professor Samuel Hines (pictured with Dr David), the biennial prize is awarded to the best first book manuscript relating to the Carolina Lowcountry and/or Atlantic World. It is administered by the Carolina Lowcountry and Atlantic World programme. Dr David’s manuscript is an extension of his Oxford D.Phil. thesis, written while he was a postgraduate researcher at the RAI.

The study examines the political economy of trade between Britain and South Carolina, emphasising its impact on Atlantic politics in the 18th century. Dr David's study demonstrates how trade at first acted as a stabilizing force, only then to condition the imperial discord that began in the 1760s. "David's manuscript presents a compendious history of the trade relations between South Carolina and Great Britain in the eighteenth century, both in the decades leading up to the Revolutionary War and immediately following the Revolution," CLAW director Simon Lewis said in announcing the award.