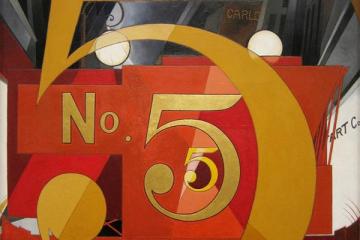 The RAI is partnering with the Ashmolean Museum for 'American Cool', a month-long festival in May 2018 celebrating American art, literature, music, drama, and film from the 1920s to the 1940s. The programme includes:

The festival accompanies the Ashmolean's major exhibition 'America's Cool Modernism: O'Keeffe to Hopper'. It will be the first exhibition to explore the 'cool' in American art in the early 20th century, from early experiments in abstraction by artists like Georgia O’Keeffe, Arthur Dove and Paul Strand to the strict, clean precisionist paintings of Charles Sheeler and Charles Demuth.

Showcasing significant examples of American art produced during the roaring 1920s and Depression-era 1930s, some for the very first time in the UK, the works on display share a smooth, crisp, clean appearance and a cool, impersonal treatment, an apparent detachment. They evoke a world in which human beings have been removed or substituted.

The Metropolitan Museum of Art has supported the exhibition with major loans, in addition to works from the Terra Collection and other international collections. The exhibition is organised by the Ashmolean Museum and the Terra Foundation for American Art.