RAI|Live: Andrea Wulf at the RAI

If you answered Alexander von Humboldt (1769-1859) to all 3 questions, then you are not only correct, but you may also have been in the audience at this term’s RAI Live, the new headline series that brings authors and audiences in conversation.

Our speaker was Andrea Wulf, 2015 Costa Biography Prize Winner. She presented and discussed her New York Times bestseller, The Invention of Nature: The Adventures of Alexander von Humboldt. Wulf foregrounded Humboldt’s American connections. She also emphasized Humboldt’s belief in the interconnectedness of the arts and sciences, a message that was warmly received by the audience.

Wulf’s talk was followed by an interdisciplinary conversation about Humboldt’s influence on politics, science and literature. The participants were Yadvinder Malhi (Professor of Ecosystem Science) and Michèle Mendelssohn (Deputy Director of the RAI and Associate Professor of English). Eduardo Posada-Carbó (Professor of the History and Politics of Latin America at the Latin American Centre) chaired. Audience members also participated.

Since being introduced in Michaelmas 2015, RAI Live has become extremely popular. This term’s event drew more than a hundred and ten attendees. In the audience, there were many faces new to the Institute, as well as long-standing friends of the RAI.

Posada-Carbó said that it was “encouraging to see such a large and diverse audience, from so many departments and divisions of the university - literature and natural sciences, history, social sciences and theology.”

Commenting on the interdisciplinarity of the event, Malhi said that it was what the university should be about.
Wulf tweeted “erudite audience at my talk at the RAI last night - so much fun to speak to a bunch of smart people.”

All in the spirit of Humboldt. 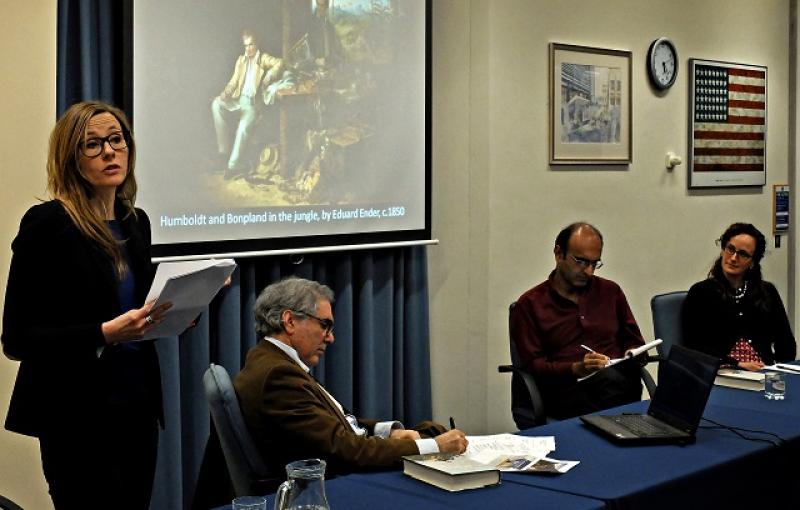