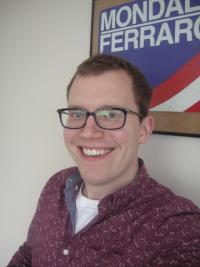 The RAI congratulates Dr Patrick Andelic on his appointment as Lecturer in American History at Northumbria University, beginning in September 2017.

Patrick completed his D.Phil. at St. Anne's College in 2015 under the supervision of Dr Gareth Davies. His doctoral dissertation explored the evolution of the congressional Democratic Party after the 1974 elections and the efforts of various legislators to adapt to an apparently more conservative political climate. He is currently revising it into a monograph, which is under contract with the University Press of Kansas.

He also holds a M.St. in U.S. History from Oxford and a MA (Hons) from the University of Edinburgh. In the final year of his doctoral studies, he was supported by a one-year studentship from the RAI made possible by the generosity of the Institute's benefactors.