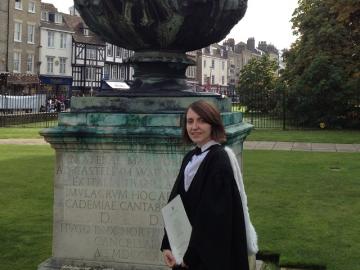 Jane Dinwoodie has been elected to a three-year research fellowship at Jesus College, Cambridge, from 1 October 2017.

During her time in Cambridge, Jane will revise her doctoral dissertation into a manuscript telling the stories of the thousands of indigenous Southerners who avoided Indian Removal during the 1820s and 1830s. She will also begin several new projects, including a study of the implications of non-removal for American imperialism in the West and an exploration of the global implications of American Indian policy.

Jane is currently a D.Phil. candidate at Oxford, where she expects to complete her doctorate in 2017. For the 2016-17 academic year, Jane is based in Philadelphia as an Advisory Council Dissertation Fellow at the McNeil Center for Early American Studies, University of Pennsylvania. She holds a BA(Hons) in History and an MPhil in Historical Studies from Cambridge University.