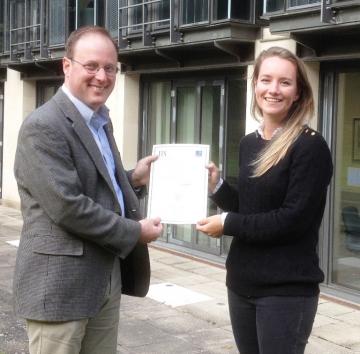 The Carwardine Prize for the outstanding student on the U.S. History M.St. course in 2016-17 has been awarded to Sage Goodwin. Stephen Tuffnell, Associate Professor of Modern U.S. History, said “Sage is an imaginative historian and a deserving winner of this year’s Carwardine Prize. Her research on the role of the American TV network CBS in framing the national discussion of the African-American Civil Rights Movement as a story of black and white activists standing together – rather than television’s conventional depiction as a penetrating spotlight on Southern racial brutality – was truly ground-breaking and will be an invaluable contribution to the history of the struggle for black equality. What’s more, Sage was an energetic participant in the RAI’s academic community and shaped its ongoing discussion of the history, culture, and politics of the United States.” Sage is now a D.Phil. candidate in American History at the RAI and at University College, where she holds the Oxford-Urquhart Graduate Scholarship.

Named in honour of Professor Richard J. Carwardine, FBA, Rhodes Professor Emeritus of American History at Oxford, the prize is awarded annually to the Master's student in U.S. History who is judged by the course convenors to be the outstanding overall student of the year. In selecting the recipient, the convenors consider not only final marks and ranking, but also the energy, enthusiasm, and enterprise that candidates brought to their research, studies, and seminar discussions over the course of the year.