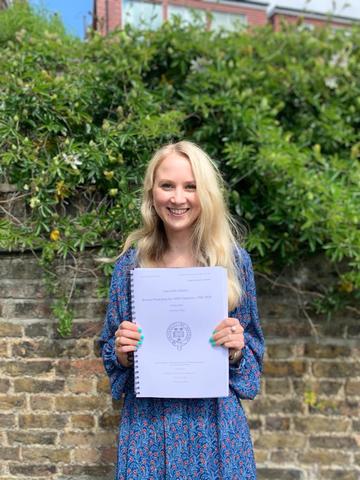 Emma Day held an RAI Graduate Scholarship in American History in 2019-20, while writing up her thesis. She surveys a productive academic year below.

I have spent the majority of my time as this year’s History Graduate Scholar at the RAI completing my D.Phil. I submitted my thesis, “Out of the Silence: Women Protesting the AIDS Epidemic, 1980-2020”, in February and passed my viva in May. The scholarship provided me the physical space as well as intellectual, emotional and financial support necessary to complete my DPhil within the four-year deadline, and I am extremely grateful to the institute for their ongoing encouragement of my research.

One of the biggest highlights of my academic year came from my role as the Postgraduate Secretary of the organisation the Historians of the Twentieth Century United States (HOTCUS). With the support of the RAI’s Academic Programme Fund, as well as funding from the British Association of American Historians (BAAS) and the Royal Historical Society (RHS), I organised the annual HOTCUS Postgraduate and Early Career Conference at the RAI in October.

The theme of the conference was “The Regulated Body”, and a number of postgraduate students from around the country as well as from the RAI community spoke on subjects ranging from race and the professionalization of nursing at mid-century, to the history of American campus policing and the history of copwatch and community countersurveillance in the long twentieth century. The keynote address was delivered by Professor Douglas Charles from Penn State University, who spoke on the process of researching his book, Hoover’s War on Gays. His keynote was combined with the first American History Research Seminar of the academic year. In conjunction with the conference, I also organised a work-in-progress meeting at Lady Margaret Hall where HOTCUS members Dr Megan Hunt from the University of Edinburgh and Liam O’Brien from University College Cork shared their research.

This year, I was also accepted to present my own research at the Organization of American Historian (OAH)’s annual conference, which was due to take place in Washington, D.C. in April. I planned to present my work exploring the relationship between AIDS and reproductive rights in the 1980s, and was awarded funding from the OAH Presidents’ Travel Fund for Emerging Historians. The meeting was cancelled due to Covid-19, but my paper, which is part of the panel, “The Politics of AIDS in the 1980s and 1990s”, has been accepted for next year’s meeting in Chicago.

Alongside finishing my DPhil, I have continued writing for different online platforms. Drawing on materials from the Philip and Rosamund Davies U.S. Elections Campaigns Archive at the Vere Harmsworth Library (VHL), I wrote a piece on the historical relationship between the gay rights movement and Presidential elections for the VHL’s blog. I had an article historicising the abortion clinic closures in the US in the wake of Covid-19 published for the Made by History blog of the Washington Post. I have also become a regular contributor to the political and economic risk consultancy Oxford Analytica, writing briefs on topics related to gender, politics and health policy.

I look forward to continuing to participate in the RAI community as a Research Fellow next year.