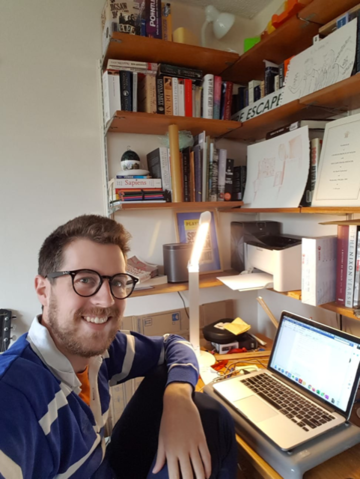 Mitch Robertson held an RAI Graduate Scholarship in American Politics in 2019-20. Here he reflects on his time at the Institute.

I can vividly remember receiving the email from former RAI Director Hal Jones informing me that I had been awarded the RAI’s Graduate Scholarship in Politics. I wrote in reply to him that this was ‘life changing news’ and my experiences over the past year have borne that out. I would like to express my sincere and deep gratitude to the benefactors of the Rothermere American Institute whose generous support has contributed to these funds.

The most significant impact that the fourth year scholarship has had is that it has enabled to me to complete my D.Phil. dissertation, The Afterlife of the Great Society. My dissertation investigates how little-considered sources of power in the American political system – notably the bureaucracy and the courts – shape the course of domestic policy far more than the President. My specific area of research is in the survival of anti-poverty programmes during the presidency of Richard Nixon. In particular, the extra year has enabled me to spend longer thinking about the ‘bigger picture’ of my dissertation as well as conducting targeted oral history interviews with key lawyers, policymakers, and bureaucrats from my programmes.

One of the primary responsibilities of the Politics Graduate Scholar is to convene the Institute’s American Politics Graduate Seminar. This year’s Seminars presented some fascinating, cutting edge research undertaken by Oxford graduates on topics ranging from public opinion on cyber-attacks, détente, regulation of financial fraud, and rationales for bombing in the Vietnam War. These seminars are not only stimulating for the audiences, but provide an important forum for graduate students to receive feedback on their work-in-progress. I know that at least one of the papers presented at the seminar this year has subsequently been published in a high-impact journal.

In Michaelmas Term, I was pleased to co-ordinate the visit of Jeffrey Weinberg – the Rothermere American Institute’s First Practitioner-in-Residence. Jeffery has served in the Office of Management and Budget under every President from Nixon to Trump. His visit included a terrific seminar moderated by former RAI Director Nigel Bowles in which Jeffrey shared his valuable insights into the modern policymaking process. Jeffrey’s visit also included a public engagement at a local school as well as one-on-one discussions with relevant researchers, including myself. An hour with Jeffrey illuminated the complex legislative clearance process far more than many books I have (tried) to read on the subject!

The end of Michaelmas provided one of the highlights of my time at the RAI. After several years of various levels of oft-mocked failure, I managed to emerge victorious as the ‘Presentation Winner’ in the Great RAI Christmas Bake Off!

This most unusual of Trinity Terms has also been a busy one for me personally, particularly in terms of public engagement. Along with Rivers Gambrell, I introduced and moderated the discussion of the 1977 film All the President’s Men, about the Washington Post’s reporting on the Watergate crisis. This was part of the RAI’s excellent RAI Goes to the Movies film series. In the final week of term, I was also pleased to chair a symposium entitled Healing Our Divided Society: The Kerner Commission at 50. This event featured Gary Younge, Professor of Sociology at the University of Manchester and the former US correspondent for The Guardian, and Alan Curtis from the Eisenhower Foundation. The event featured two captivating talks which linked history, politics, the media, and social policy. At a time of deep turmoil in the United States, this timely event reminded the audience of the structural inequalities present in American society but also presented evidenced-based ideas to heal America.

In closing, I would like to reiterate my deep gratitude and appreciation to the benefactors of the Rothermere American Institute for the support over not only my entire degree programme, but in particular for the fourth year doctoral scholarship in US Politics.