‘The Nation’s Top Dog’: The Enduring Fascination of Animals in the White House

In 2019, Donald Trump scoffed at a rally in El Paso, "how would I look walking a dog on the White House lawn?". Trump’s argument at El Paso that he had so strong a direct relationship with voters that he didn’t need a dog to enhance his political image did indeed point to the common conception that animals have been a successful public relations tool. They often serve to bring Americans and the President closer, as well as sometimes bringing America and other nations together through gift-giving. However, when there are pressing questions about the economy, foreign policy, and now public health, why do we care about pets in the White House, and why does this matter?

The history of animals in the White House is an underappreciated aspect of understanding presidential personality, image-making and public relations. Indulging in the company of a pet gives a glimpse of the humane, private persona of the President. A clear case in point was Lyndon Johnson, who had to contend with the disarray of the late 1960s: a nation traumatised by the assassination of Kennedy, the Cold War and Vietnam. Images such as that of Johnson reading memos in the pool at the LBJ Ranch in Texas with his grandson and his mixed-breed dog Yuki, give historians insight into a moment of light relief among the political chaos of the era. 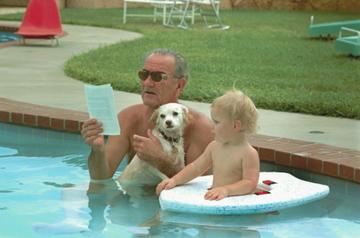 Indeed, the press loved publishing light stories relating the life of presidential pets, with the tonsillectomy of the Reagan’s spaniel, Rex, making The New York Times in 1986. Perhaps the most famous example of the relevance of pets in the White House came from Barbara Bush’s publication of the eponymous Millie’s Book: As Dictated to Barbara Bush, written from the perspective of their spaniel: the profits from the book went to Mrs. Bush’s literacy foundation and the book even reached number one on the bestsellers list.

Likewise, there have been pets given as gifts by foreign nations, such as the dog Pushinka given to President Kennedy by Premier Khrushchev in 1961. As one of the puppies of the first dog to survive space travel, Strelka, Pushinka was a gesture of friendship but also a lingering, living reminder of the Soviets’ early victories in the space race. 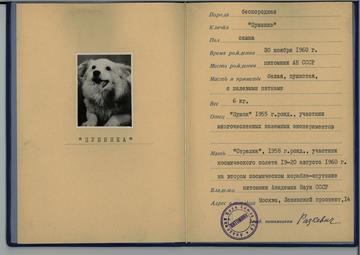 There have also been some weird and wonderful animals in residence at the White House, which have admittedly limited historical significance, but which show that life at the mansion was not merely all paperwork and meetings. Perhaps the oddest of all was Rebecca Raccoon: sent to the Coolidges for their Thanksgiving dinner in 1926 from a constituent in Mississippi, Rebecca was saved by the First Lady and brought along to the annual Easter Egg Roll to amuse the children gathered at the event.

The various creatures in residence at the White House over time, then, humanise the First Family and, in some cases, play minor roles themselves in the broader political life at 1600 Pennsylvania Avenue.

Elizabeth Rees is currently in her first year of her D.Phil. at St. Catherine’s College, University of Oxford. As a part of the RAI, she is supervised by Professor Adam Smith. Her thesis, The Counterpart System: How Does the East Wing and the Office of First Lady Develop Within the Executive Establishment Between 1961-1980?, investigates the development of the First Lady’s staff in the East Wing and reframes the presidency as a head of state establishment as opposed to a merely partisan one. Elizabeth currently convenes the American History Graduate Seminar and is working on two publications: 'Fit to Govern? The Presidency, Running and Perceptions of Strength' appearing in the edited volume Sports and the American Presidency: From Theodore Roosevelt to Donald Trump, to be published by Edinburgh University Press, as well as 'The Animal Envoy: Diplomatic Gifts of Animals to the White House' to be published by the White House Historical Association Quarterly.