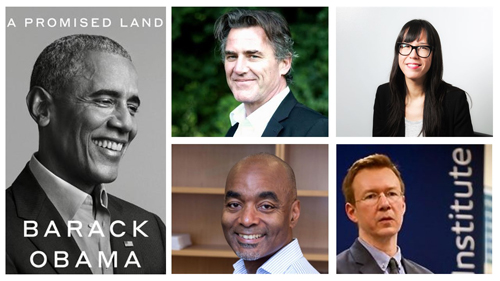 Join us for a discussion of Barack Obama's much-anticipated new memoir, A Promised Land. If you would like to read the book in advance (not compulsory!), it will be available from all good booksellers from 17 November 2020.

Jennifer Szalai is currently the nonfiction critic at The New York Times. She was previously an editor at the Book Review and a senior editor at Harper's Magazine. Her work has appeared in Slate, New York Magazine, The New Yorker online, and Prospect, among other publications.

Steven Sarson did his BA at the University of East Anglia and his PhD at Johns Hopkins University. He worked at Swansea University for 22 years, and since 2014 has been Professor of American Civilisation at Jean Moulin University, in Lyon. He has published three books and numerous book chapters and journal articles, including in The Journal of Economic History, The William and Mary Quarterly, and The Journal of the Early Republic, and he has edited an 8-volume collection of documents on the American colonies and British empire. He normally works on the early modern British-American Atlantic World, and his current project is on history and historical consciousness in the US Declaration of Independence. However, his most recent book, Barack Obama: American Historian, published in 2018, was a study of Barack Obama’s views on American history from the colonial era to the present, as expressed in his speeches and writings.

Lloyd Pratt is the Drue Heinz Professor of American Literature at the Rothermere American Institute and the Faculty of English. His research interests lie in nineteenth-century American literature, African-American literature, the literatures of the American South, the Novel, theory and criticism, gender and sexuality, and the history of the book. His books include The Strangers Book: The Human of African American Literature (2015) and Archives of American Time: Literature and Modernity in the Nineteenth Century (2010).