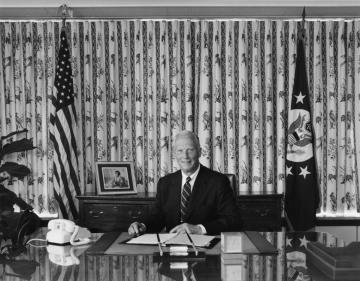 The John J. Louis Jr. Lecture in Anglo-American Relations is one of the highlights of the Institute's year. The lecture is named in honour of John Jeffry Louis, Jr., United States Ambassador to the Court of St. James's under President Ronald Reagan between 1981 and 1983 (right), and is generously made possible by the Louis Foundation.

The lecture has been given by Lord Patten of Barnes, CH, PC, Chancellor of the University of Oxford; Ambassador Matthew Barzun, United States Ambassador to the Court of St. James's, 2013-17; and by The Hon James P. Rubin, former U.S. Assistant Secretary of State for Public Affairs.

Recordings of each Louis Lecture are available here: