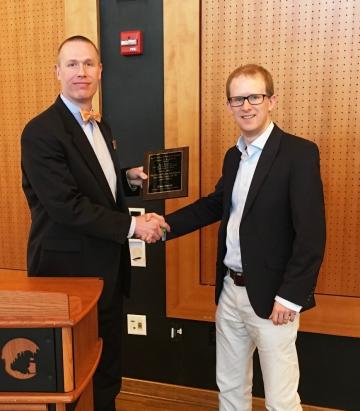 The RAI congratulates Huw David, the Institute's Director of Development, on winning the George C. Rogers Jr. Prize for the best book of South Carolina history published in 2018 for Trade, Politics, and Revolution: South Carolina and Britain's Atlantic Commerce, 1730–1790. The prize is awarded annually by the South Carolina Historical Society and was given in a ceremony in Charleston, South Carolina, on Saturday 9th February.

Trade, Politics, and Revolution: South Carolina and Britain's Atlantic Commerce, 1730–1790 delves into the lives of London's 'Carolina traders', exploring their influence on commerce and politics in the years before and after the American Revolution. This little-known group of transatlantic merchants played a pivotal but historically neglected role as tensions rose in the South Carolina lowcountry.

The book offers a fresh understanding of trade in South Carolina's early history and the shifting climate that led to the American Revolution, as well as reaching beyond the war to explore the reconstruction of trade routes between the newly founded United States and Great Britain. By focusing on one segment of transatlantic trade, it provides a new interpretive approach to imperialism and exposes the complex, deeply personal rift that divided the Carolina traders from their homeland and broke the colonies from the mother country.

Huw David took his D.Phil. in History at Lincoln College, Oxford. His thesis was awarded the 2015 Hines Prize by the College of Charleston for the best first manuscript relating to the Carolina Lowcountry and the Atlantic world.

Further details are available from the University of South Carolina Press.