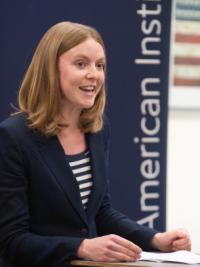 Will Donald Trump be the next President of the US? RAI Fellows Ursula Hackett (right) and Nigel Bowles discuss Donald Trump's chances of becoming the Republican presidential nominee and President of the United States in an interview with The Independent newspaper. "At this point it is very difficult to point to any one thing that could derail him" from winning the Republican nomination, says Dr Hackett. "Trump is the strong favourite to secure the Republican nomination", Dr Bowles adds. Read the interview here.