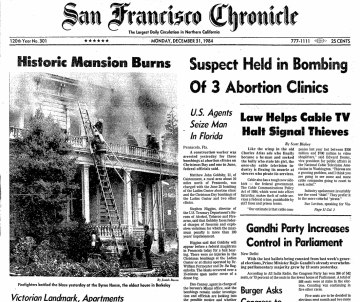 The RAI is pleased to announce that Oxford library users now have access to to the digitised archive of the San Francisco Chronicle from 1865-1984 via Readex’s America’s Historical Newspapers platform. Access is now available via SOLO or OxLIP+ (with remote access for University members via single sign-on). The acquisition of this major resource follows the recent acquisitions of two other important databases: the American Antiquarian Society Historical Periodicals Collection and the Daily Mail Historical Archive, 1896-2004.

Though it was Northern California’s “newspaper of record,” the San Francisco Chronicle’s influence was so far-reaching that it was known as the Voice of the West. With colorful reporting and commentary on news ranging from the aftermath of the Gold Rush to the effects of World War II to the counterculture boom of the 1960s, the Chronicle offers an unparalleled glimpse into the issues and events that shaped the West Coast for over a century.

Founded by two teenage brothers with a $20 gold piece borrowed from their landlord, the San Francisco Chronicle soon boasted the largest circulation of any West Coast newspaper. In its early years, the paper relied on a mixture of advertisements, anecdotes and satire by the likes of Mark Twain to capture life in the wlid boomtown of San Francisco. As the first transcontinental railroad came to town and capitalism and corruption boomed in equal parts, the Chronicle made it a mission to expose crooked politicians and support honest ones. This practice resulted in a shootout in the paper’s office that killed one of the founding brothers. The Chronicle dutifully reported the news.

By the turn of the century, the San Francisco Chronicle was so successful it was able to provide firsthand reports from the Klondike Gold Rush, sponsor free concerts in the streets and send reporters to cover sporting events as far away as Reno, Nevada. When the 1906 earthquake devastated the city, the Chronicle kept publishing. Its coverage of the stock market crash, the Great Depression and labor strikes won the paper its first Pulitzer. Later in the 20th century, the paper became known for colorful columnists like Herb Caen and the original “Dear Abby,” as well as its astute observations of the counterculture movement, gay rights and the onset of the AIDS crisis.

Researchers  can browse the newspaper by date, or search the full text from the initial screen. Individual issues may be read page-by-page and can also be downloaded as PDFs.