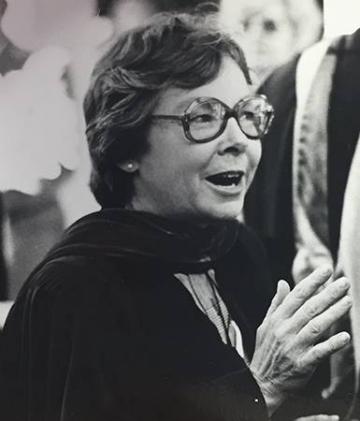 The Rothermere American Institute was saddened to learn of the death of Willie Lee Rose on 20th June 2018 at the age of 91. A distinguished historian of slavery and the Reconstruction period, she was the first woman appointed to the Harmsworth Professorship of Amercan History, a post she held in 1977-78.

Born in Bedford, Virginia, Rose graduated from Mary Washington College and began her career as a high school teacher in Elkridge, Maryland, from 1947 to 1949, when she married William G. Rose. In 1955, she began graduate studies at Johns Hopkins University.

After receiving a doctoral degree from Johns Hopkins, Rose taught at the University of Virginia, where she was named Commonwealth Professor of American History. She also served as the Cardozo Visiting Professor at Yale. She returned to Johns Hopkins University in 1973 as Professor of History.

Rose is best known for her groundbreaking book Rehearsal for Reconstruction: The Port Royal Experiment, which won several major prizes, including two awards from the Society of American Historians: the Allan Nevins Prize for best dissertation and the Francis Parkman Prize for the best work of American history. Published in 1964, the book is considered a landmark work in the study of slavery in the United States. The book explored the experience of 10,000 blacks in Port Royal, South Carolina, who were liberated early in the Civil War when Union troops captured the town in 1861. Rose argued that even before the war ended — indeed, before it started — black people had already been shaping how the United States would develop after emancipation.

Rose was appointed chair of the American Historical Association's Committee on the Status of Women in the Historical Profession in 1970. The committee released a report — known as 'The Rose Report' — that documented widespread discrimination against women within academic departments and within the AHA. In its introduction Rose wrote, "The present demand for social justice for women coincides with the permanent interest of the historical profession. To increase the opportunities open to women in the field of history is to advance the quality of the profession itself."

In 1991, the AHA awarded Rose the Troyer Steele Anderson Prize, given every ten years to a historian who has made "an outstanding contribution to the advancement of the purposes of the Association."

Shortly after returning to Johns Hopkins from Oxford, Rose suffered a delilitating stroke that would greatly limit her academic work. A collection of her essays, Slavery and Freedom, was edited by fellow Johns Hopkins professor William W. Freehling and was published by Oxford University Press in 1982. The essays were hailed by the New York Times as a "splendid achievement," adding that "Rose manages to keep conflicting ideas, each containing a part of the truth, in tension and, in the process, to keep her balance and fairness to a remarkable degree."

Her husband, William G. Rose, died in 1985. Professor Rose is survived by a niece, Vicki Sheretz, a nephew, John Nichols, and several cousins.